Previous tutorial was all about setting up the GLSurfaceView. Be sure to read it beacuse it’s a really importent one to be able to continue.

In this tutorial we will render our first polygon.

3D models are built up with smaller elements (vertices, edges, faces, and polygons) which can be manipulated individually.

A vertex (vertices in plural) is the smallest building block of 3D model. A vertex is a point where two or more edges meet. In a 3D model a vertex can be shared between all connected edges, paces and polygons. A vertex can also be a represent for the position of a camera or a light source. You can see a vertex in the image below marked in yellow. 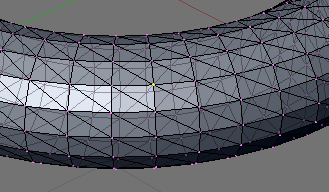 Don’t forget that a float is 4 bytes and to multiply it with the number of vertices to get the right size on the allocated buffer.

When you are done with the buffer don’t forget to disable it.

Edge is a line between two vertices. They are border lines of faces and polygons. In a 3D model an edge can be shared between two adjacent faces or polygons. Transforming an edge affects all connected vertices, faces and polygons. In OpenGL ES you don’t define the edges, you rather define the face by giving them the vertices that would build up the three edges. If you would like modify an edge you change the two vertices that makes the edge. You can see an edge in the image below marked in yellow. 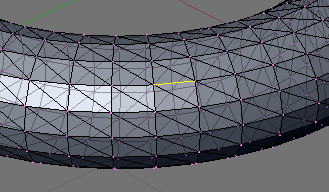 Face is a triangle. Face is a surface between three corner vertices and three surrounding edges. Transforming a face affects all connected vertices, edges and polygons. 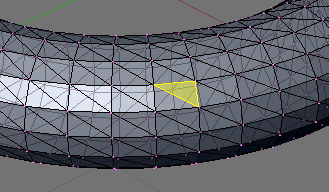 The order does matter.

When winding up the faces it’s important to do it in the right direction because the direction defines what side will be the front face and what side will be the back face. Why this is important is because to gain performance we don’t want to draw both sides so we turn off the back face. So it’s a good idea to use the same winding all over your project. It is possible to change what direction that defines the front face with glFrontFace.

To make OpenGL skip the faces that are turned into the screen you can use something called back-face culling. What is does is determines whether a polygon of a graphical object is visible by checking if the face is wind up in the right order.

It’s ofcource possible to change what face side should be drawn or not. 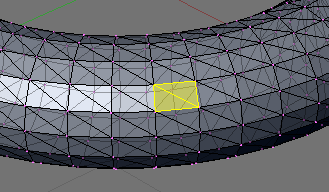 Time to wind the faces, remember we have decided to go with the default winding meaning counter-clockwise. Look at the image to the right and the code below to see how to wind up this square.

To gain some performance we also put this ones in a byte buffer.

Don’t forget that a short is 2 bytes and to multiply it with the number of indices to get the right size on the allocated buffer.

Time to get something on the screen, there is two functions used to draw and we have to decide which one to use.

The two functions are:

glDrawArrays draws the vertices in that order they are specified in the construction of our verticesBuffer.

glDrawElements need a little bit more to be able to draw. It needs to know the order which to draw the vertices, it needs the indicesBuffer.

Since we already created the indicesBuffer I’m guessing that you figured out that’s the way we are going.

What is common for this functions is that they both need to know what it is they should draw, what primitives to render. Since there is some various ways to render this indices and some of them are good to know about for debugging reasons. I’ll go through them all.

What primitives to render

Draws individual points on the screen.

Same as above, with a segment added between last and first vertices.

Triples of vertices interpreted as triangles.

Draws a series of triangles (three-sided polygons) using vertices v0, v1, v2, then v2, v1, v3 (note the order), then v2, v3, v4, and so on. The ordering is to ensure that the triangles are all drawn with the same orientation so that the strip can correctly form part of a surface.

I think the GL_TRIANGLES is the easiest to use so we go with that one for now.

So let’s putting our square together in a class.

We have to initialize our square in the OpenGLRenderer class.

And in the draw function call on the square to draw.

If you run the application now the screen is still black. Why? Because OpenGL ES render from where the current position is, that by default is at point: 0, 0, 0 the same position that the view port is located. And OpenGL ES don’t render the things that are too close to the view port. The solution to this is to move the draw position a few steps into the screen before rendering the square:

I will talk about the different transformations in the next tutorial.

Run the application again and you will see that the square is drawn but quickly moves further and further into the screen. OpenGL ES doesn’t reset the drawing point between the frames that you will have to do yourself:

Now if you run the application you will see the square on a fixed position.

The info used in this tutorial is collected from:
Android Developers
OpenGL ES 1.1 Reference Pages

You can download the source for this tutorial here: Tutorial_Part_II
You can also checkout the code from: code.google.com